Landmarks: A Brief History of the Department 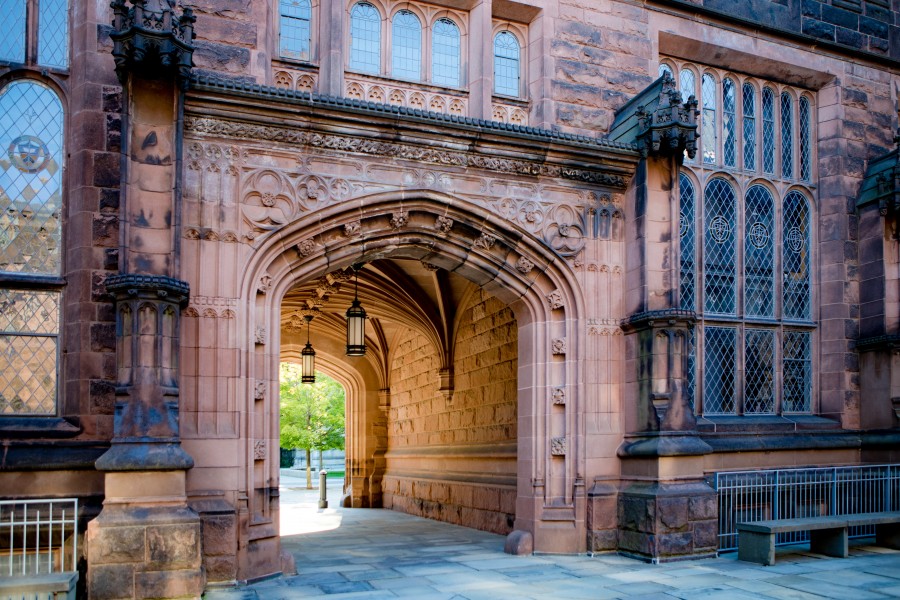 Founded in 1956, the German Department has been home to a long line of distinguished scholars in all fields of German studies.

Since 1956, when Professor Victor Lange came from Cornell University and split off an independent department from a Department of Modern Languages, the German Department at Princeton University has been home to a long line of distinguished scholars in all fields of German literature and culture.

Long considered a leading program for the training of Germanists, the department has built on its strength in literature, literary theory, and philosophy by adding significant faculty strength in media studies and the visual arts.

In Exile – A Desk in Princeton 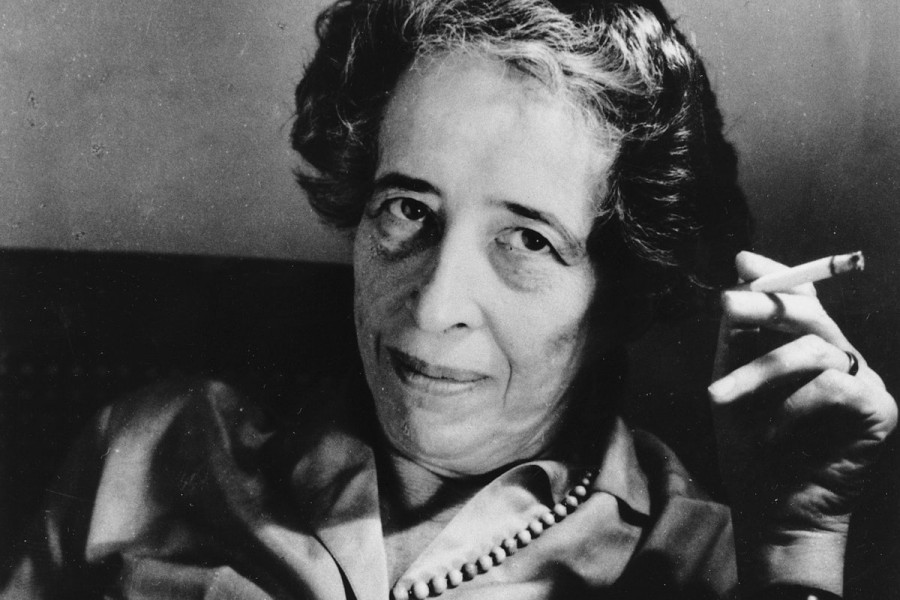 Hannah Arendt (1906–1975), one of the many intellectual exiles to come to Princeton in the 20th century.

On May 10, 1933, in Berlin and all over Germany, the Nazi regime organized the burning of books deemed “un-german.” In this situation, many writers and scholars decided to go into exile and rescue German literature and culture from the Nazis. Princeton was one of the major hubs of activity. Some stayed longer, such as Kahler and Kantorowicz, others, like Thomas Mann and Hermann Broch, had shorter stays and moved on.

Erwin Panofsky (March 30, 1892 Hannover – March 14, 1968 Princeton) was a Privatdozent at the University of Hamburg since 1921. Beginning in 1927, he was the University’s first full professor in art history. From 1931 to 1934 he was a Visiting Professor of Fine Arts at New York University, spending alternate terms in New York and at the University of Hamburg. Dismissed in April 1933, he emigrated to the United States. Panofsky taught at Princeton and at NYU. In 1935, he joined the newly constituted humanities faculty at the Institute for Advanced Study in Princeton. Panofsky taught at Princeton till his death on March 14, 1968.

Ernst Hartwig Kantorowicz (May 3, 1895 Poznań – Sept. 9, 1963 Princeton) was a historian of medieval political and intellectual history, known for his 1927 book Kaiser Friedrich der Zweite on Holy Roman Emperor Frederick II, and in particular for The King’s Two Bodies (1957). Kantorowicz held a chair at the University of Frankfurt. In 1933, he had to resign his university position. Upon leaving, he took up a teaching position for a short time at Oxford before moving to the University of California, Berkeley, in 1939. After a controversy prompted by his reaction to McCarthyism (he refused to take a loyalty oath required of all UC employees), he moved to the Institute for Advanced Study in Princeton. Not long after arriving in Princeton, he published The King’s Two Bodies. See Robert L. Benson, Johannes Fried (Hrsg.): Ernst Kantorowicz. Erträge der Doppeltagung Institute for Advanced Study, Johann-Wolfgang-Goethe-Universität, Frankfurt. Steiner, Stuttgart 1997, (Frankfurter historische Abhandlungen 39).

Erich von Kahler (October 14, 1885 Prague – June 28, 1970 Princeton) was born in Prague. He studied philosophy, literature, history, art history, sociology, and psychology at Munich, Berlin, and Heidelberg before earning his doctorate at the University of Vienna in 1911, with a thesis titled “Über Recht und Moral”. In 1933 he left Germany, emigrating to the United States in 1938. In the U.S. he taught at The New School for Social Research, Black Mountain College, Cornell University, and Princeton University, and was a member of the Institute for Advanced Study at Princeton. A collection of his papers can be found in the Manuscripts Division of Firestone Library, Princeton. Also see the extensive Leo Baeck Institute archive on Kahler.

Hermann Broch (November 1, 1886 Vienna – May 30, 1951 New Haven) was arrested on the day of the German annexation of Austria, March 12th, 1938 and detained briefly. With the help of James Joyce and other writers, Broch was allowed to emigrate from Nazi Austria. He moved to London, then to Scotland, and finally to the United States, where he settled first in Princeton, New Jersey, to stay there with his friend Erich von Kahler at his home on 1 Evelyn Place, from 1942 to 1948. Here, he wrote Der Tod des Vergil, which was published both in German and English in 1945.

Thomas Mann (June 6, 1875 Lübeck – August 12, 1955 Zürich), the self-exiled German novelist and winner of the 1929 Nobel Prize in Literature, lived in Princeton for two and a half years. During the academic years 1938–1940, he held the position of Lecturer in Humanities at Princeton, financed principally by the Rockefeller Foundation. The University made him a doctor of Letters honoris causa in May 1939. At Princeton, he delivered seven major lectures in English:

While living in Princeton, he completed Lotte in Weimar and started the fourth volume of the Joseph tales. The Firestone Library holds the Molly Shenstone Collection which includes correspondence, photographs, souvenirs, printed material, and other miscellanea collected by Molly Shenstone about Thomas Mann.

Erich Auerbach (November 9, 1892 Berlin – October 13, 1957 Wallingford) emigrated to Turkey in 1936 and moved to the United States in 1947, where he first taught at Pennsylvania State College. In 1949, he came to the Institute for Advanced Study at Princeton for one year. The “Princeton Seminars in Literary Criticism”, now called the “Gauss Seminars in Criticism”, formally began on October 6, 1949 with Erich Auerbach’s series on Pascal, Baudelaire, and Flaubert. Ernst Robert Curtius, the author of Europäische Literatur und lateinisches Mittelalter, and one of his favorite critics, was in the audience.

Hannah Arendt (October 14, 1906 Hannover – December 4, 1975 New York) emigrated to the United States in 1941. In October and November 1953, she gave six Lectures as part of the “Gauss Seminars on Criticism” on “Karl Marx and the Tradition of Western Political Thought”. She was the first woman to be invited to give a Gauss seminar. In spring 1959, she came back to Princeton as a Visiting Professor, lecturing on “The United States and the Revolutionary Spirit” (resulting in the book On Revolution, in German Über die Revolution).

No
In Exile
No

Gruppe 47 – German Literature in the U.S. 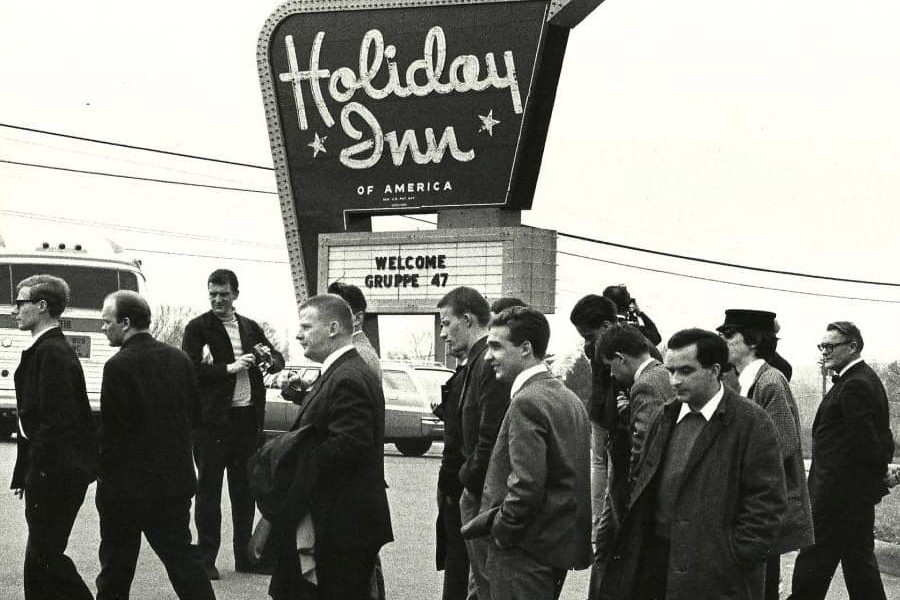 The event at Princeton was recorded. The complete recordings of the readings and the discussions of these three days have now been made accessible by the German Department at Princeton.

Far less known is the fact that on the same weekend, and the following Monday, April 25th, two events also took place at Princeton bringing together some of the most influential figures of the contemporary American cultural scene. The first, a two day series of events, was titled “What’s Happening: The Arts 1966”. Allen Ginsberg read from his latest poems, Tom Wolfe spoke about art becoming the religion of the educated, Milton Babbitt discussed the latest developments of electronic music and Duke Ellington gave a concert on Saturday night.

On Monday, a conference addressed the question of modern authorship under the title “The Writer in the Affluent Society”. This was meant as an opportunity for writers and critics from both sides of the Atlantic, American and German, to engage in an intellectual exchange.

On Tuesday and Wednesday, April 26 and 27, most members of Gruppe 47 moved on to New York, where a number of publishers and literary magazines hosted a series of dinners and receptions. Afterwards, 25 of the group members used a Ford Foundation travel grant to go on reading tours to other cities and University campuses.

The Gruppe 47 meeting has by now entered the annals of literary history. An event of such significance calls for interpretation and re-interpretation. From today’s perspective, the convergence of the German group with their North-American contemporaries raises a series of questions concerning whether and how these artists communicated coming from such distinct cultural contexts.

Such encounters are always expected to give rise to an increase in cross-cultural understanding, even the strategic recalibration of shared goals and values. Or so the story goes. That such a successful meeting was at all possible, both intellectually and on an organizational level was a premise that was clear, at least for the donor. Such cultural and political optimism was translated clearly by a phrase in the donor’s final report that summed up the meeting as having “enlarged the understanding of America among the most articulate German men of letters.”

But such a summary risks a naive, under-theorized take on cultural encounters, which on this level, as we now know, tend towards their own singular logic. Between the after-image of the meeting and its reality there lies a series of possible complexities and fractures. The identity of the German group remained strictly controlled due to their self-promotion as an organ of national literature. This problematic goal was reflected in the rigid procedures they had chosen to frame their visit: a tight schedule, restricted access to the meetings, which often took place behind closed doors and followed a fixed yet unspoken hierarchy. The group’s self-regulation ran in conflict with their mission to communicate as cultural emissaries. The paradigms of national literature and high culture were bound to touch their limits when juxtaposed with competing models of cosmopolitan and popular culture. The contemporaneity of the Gruppe 47 with the North American scene may very well have been a competitive one, testing the borders and limits of national aesthetic, political and cultural agendas. More than an event of self-evident cultural importance, the archive of the visits opens the possibility for researchers to discover what happens when institutions as different as academic departments, national literary groups and popular cultural figures meet.

The Internationale Vereinigung der Germanistik (International Association of German Studies) had been founded in Florence, Italy in 1951. Its conferences, held every five years, bring together the most distinguished scholars of German literature and culture from around the world. After meetings in Rome, Copenhagen, and Amsterdam, the fourth international congress of the Association was held in Princeton. It was hosted by Professor Victor Lange, chair of Princeton’s Department of Germanic Languages and Literatures, who was serving as President of the Internationale Vereinigung der Germanistik. The congress, which focused on the theme “Dichtung, Sprache und Gesellschaft (Literature, Language, and Society), did much to establish the international reputation of the Princeton German Department.

Victor Lange, the father of the modern Princeton department, was born in Leipzig, Germany. After studying English and German Literature in Oxford, Munich, Leipzig, Toronto, and Paris, he taught at the University of Toronto, Smith College, and Cornell University. He came to Princeton in 1957 as the founding chairman of both the Department of Germanic Languages and Literatures and the Department of Comparative Literature. In the course of a distinguished Princeton career, Lange, the John N. Woodhull Professor of Modern Languages, was awarded two Guggenheim Fellowships, the Friedrich Gundolph Prize of the Deutsche Akademie, the Goethe Medal of the city of Frankfurt, the Goethe Medal of the city of Weimar, and the Großen Verdienstkreuz of the Federal Republic of Germany. The Department of German’s senior thesis prize is named in honor of Victor Lange. 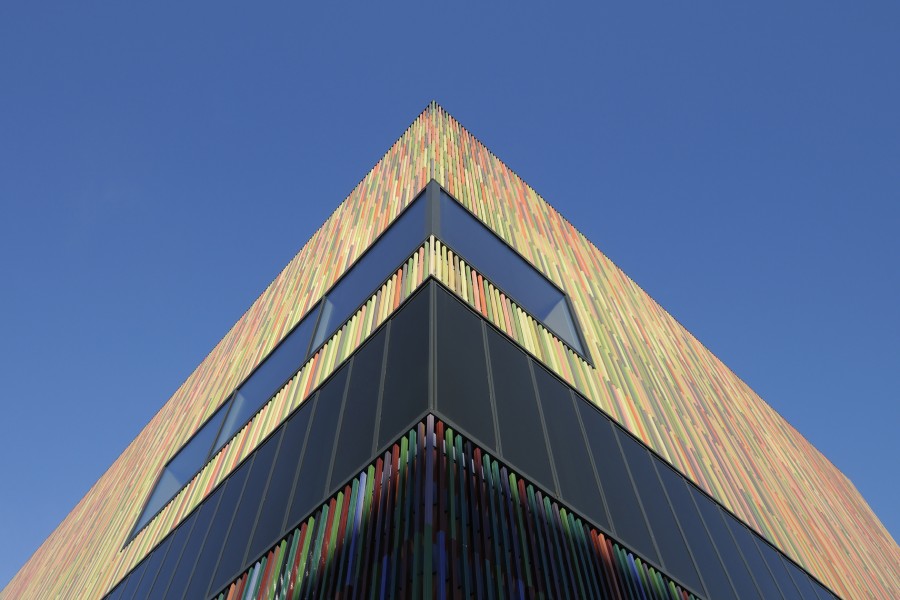 The German Department in Princeton has a long standing interest in Media Studies reflected in the research and teaching agendas of the faculty and students. Their interests have led to a series of international projects and institutional exchanges.

CTRL [SPACE]: Rhetorics of Surveillance from Bentham to Big Brother was a major international exhibition on view at the Zentrum für Kunst und Medientechnologie (ZKM) in Karlsruhe through February 2002. It was curated by Thomas Levin [and accompanied by a publication of the same title].