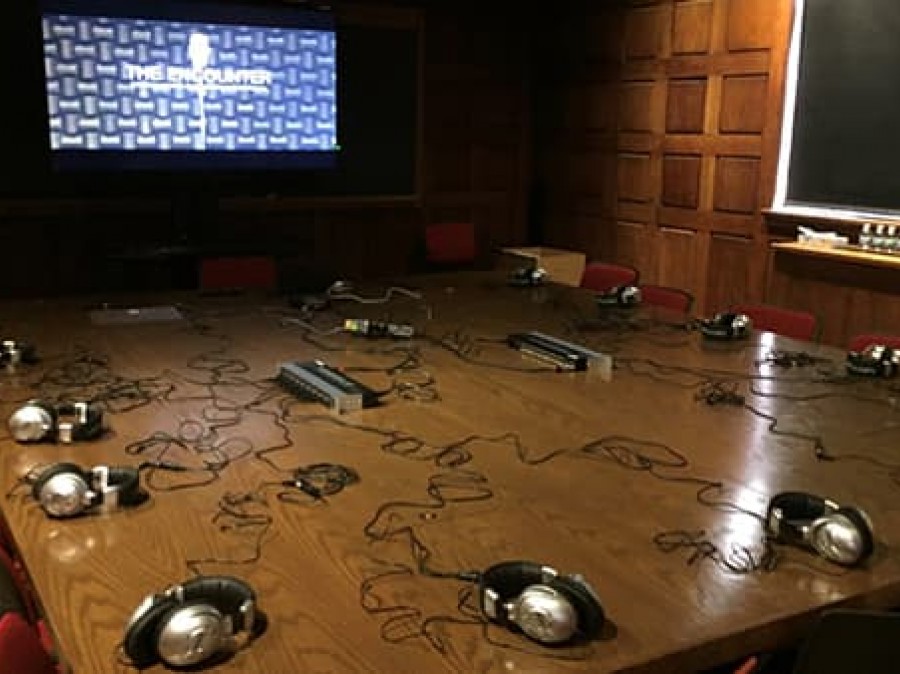 “The Encounter” is a play by international theatre company Complicite and its artistic director Simon McBurney, inspired by the novel Amazon Beaming by Petru Popescu. It was first performed at the Edinburgh International Festival on 8 August 2015, and received its London premiere at the Barbican in February 2016 before embarking on a world tour. The play is performed by a single actor working with sound technicians to create a range of voices and aural effects conveyed to the audience via headphones. It tells the story of National Geographic photographer Loren McIntyre, who, in 1969, found himself lost among the people of the remote Javari Valley in Brazil. It was an encounter that was to change his life, as he began to explore, through the indigenous culture in which he was immersed, the limits of human consciousness. The play traces McIntyre’s journey and experiences through a constantly shifting sound world created live on stage in front of the audience. A ‘Note on the Text’ in the published script explains that ‘During the introduction the audience are asked to put on a set of headphones, which they then wear for the duration of the performance. Everything they hear is through these headphones. The actor uses a range of microphones that can be modified to create the voice of Loren McIntyre and other characters. The actor also creates a variety of live foley sound effects onstage, and uses loop pedals to create exterior soundscapes and the interior worlds of the characters. The performer also plays some sound and audio recordings live through their mobile phone, iPod, and various speakers. All sounds created or played onstage are picked up and relayed to the audience’s headphones through a variety of onstage microphones, one of which is binaural. Other sound is played and mixed live by two operators who in part improvise in reaction to the performer onstage.’ The Complicite production was directed and performed by Simon McBurney, co-directed by Kirsty Housley and designed by Michael Levine, with sound design by Gareth Fry with Pete Malkin.

The German Department provided a unique experience with over a dozen stereo headsets, so that listeners would be immersed in the “aural” separations and effects.