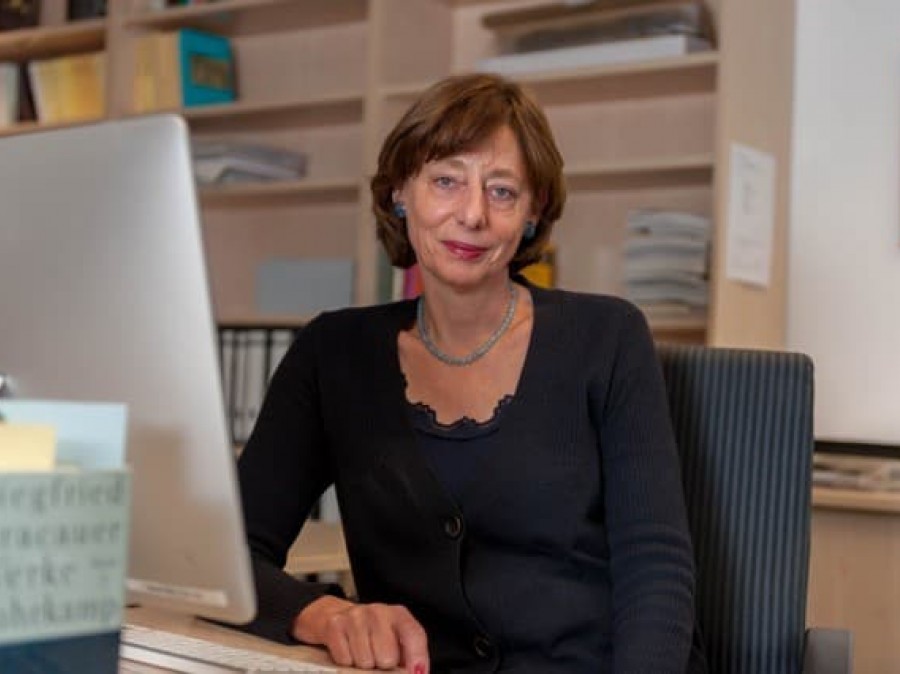 Professor Inka Mülder-Bach, one of the popular Permanent Visiting Professors on the German Department faculty, will be in residence in Princeton for the Spring semester 2018 during which she will teach a graduate seminar (GER 526) entitled “German Literature in the Fin de Siècle.”

Since the late 18th century small narrative forms such as the novella, the anecdote and the case story have enjoyed increasing popularity among the readership and gained increasing importance for the field of narrative genres and the development of techniques of narration. What is at stake in the poetics of these forms and how can we describe their specific possibilites, functions and achievements? The seminar will explore these questions in readings of texts ranging from the late 18th to the early 20th century.

Prof. Mülder-Bach’s undergraduate class (GER 307) “Between Decadence and Renewal: German Literature in the Fin de siècle,” will take place on Tuesday and Thursday afternoons from 1:30–2:50pm. Her description of the seminar, whose readings will be in German with class discussion in both German and English, reads as follows:

The turn of the 19th to the 20th century, the so-called Fin de siècle, is a formative period for modern German literature. It is marked by radical social and technological transformations, a simultaneity of heterogeneous artistic movements and tendencies and a cultural discourse in which notions of end and beginning, decadence and renewal are paradoxically blended. The course will give an overview over the cultural topographies of this period and study it in exemplary literary and theoretical manifestations.

Prof. Mülder-Bach received her PhD from the University of Tübingen after academic training at Tübingen, Oslo, and Berkeley. Before joining the Institute of German Philology at Ludwig Maximilian Universität (LMU) in Munich in 1998, she held positions at the Freie Universität and the Zentrum für Literaturforschung in Berlin. Mülder-Bach has been a visiting professor at Columbia University (New York), the IFK (International Research Center for Cultural Studies, Vienna), the Heinrich-Heine-Universität (Düsseldorf), and New York University. Her research focuses on German literature from the 18th to the 20th century in a comparative perspective, traditions of aesthetics, narratology, scenes of origins, poetics of the novel and theories of prose. She is editor of the works of Siegfried Kracauer and co-editor of the journal POETICA. Her most recent book publications include a widely acclaimed monograph on Robert Musil’s novel The Man without Qualities (Robert Musil. Der Mann ohne Eigenschaften. Ein Versuch über den Roman, 2013) and a 2015 volume on case stories (Casus und lapsus, coedited with Michael Ott). Mülder-Bach is the speaker of the interdisciplinary research program „Writing prose“ at the Center of Advanced Studies at LMU and a member of the new DFG Research Group “Philologie des Abenteuers” [Philology of Adventure], within which she directs a research project on the “Transformations of Adventure in the Bildungsroman and Novella.” Further information about Prof. Mülder-Bach’s research can be found in an intellectual portrait published in 2016 in the journal Einsichten (http://german.princeton.edu/wp-content/uploads/2018/01/Einsichten-Artikel1.pdf).

Prof. Mülder-Bach is a Vertrauensdozentin der Studienstiftung des deutschen Volkes. In 2008–09 and 2010–11 she held an Excellence-in-Research professorship at the LMU Munich, and from 2009–2010, served as Vice-President of the LMU. In 2013 she was awarded the Federal Cross of Merit of the Federal Republic of Germany.